Fiction: Gary Barwin for Nothing the Same, Everything Haunted: The Ballad of Motl the Cowboy (Random House Canada)

Children and Youth: Sigal Samuel for Osnat and Her Dove (Levine Querido)

Holocaust: Judy Batalion for The Light of Days: The Untold Story of Women Resistance Fighters in Hitler’s Ghettos (William Morrow)

Children/Youth: Edeet Ravel for A Boy is Not a Bird (Groundwood Books)

Fiction: Jennifer Robson for The Gown: A Novel of the Royal Wedding (HarperCollins)

Memoir: Ayelet Tsabari for The Art of Leaving (Harper/Collins)

History: Matti Friedman for Spies of No Country: Behind Enemy Lines at the Birth of the Israeli Secret Service (Signal/McClelland & Stewart)

Yiddish: Goldie Morgenthaler, translator, for Confessions of a Yiddish Writer and Other Essays by Chava Rosenfarb (McGill-Queen's University Press)

Memoir/Biography: Kathy Kacer with Jordana Lebowitz for To Look a Nazi in the Eye: A Teen’s Account of a War Criminal Trial (Second Story Press)

Yiddish: Seymour Mayne for In Your Words: Translations from the Yiddish and the Hebrew (Ronald P. Frye & Co)

Holocaust Literature: Max Wallace for In the Name of Humanity: The Secret Deal to End the Holocaust (Allen Lane/PenguinRandom House Canada)

Holocaust Literature: Myrna Goldenberg, editor, for Before All Memory Is Lost: Women's Voices from the Holocaust (Azrieli Foundation)

Children and Youth Fiction: Eva Wiseman, for Another Me (Tundra Books)

History: Roger Frie, for Not In My Family: German Memory and Responsibility After the Holocaust (Oxford University Press)

History: Michael Marrus, for Lessons of the Holocaust (University of Toronto Press)

Scholarship: James A. Diamond, for Maimonides and the Shaping of the Jewish Canon (Cambridge University Press).

Biography/Memoir: Alison Pick, for Between Gods: A Memoir (Doubleday Canada).

History: Joseph Hodes, for From India to Israel: Identity, Immigration, and the Struggle for Religious Equality (McGill-Queen’s University Press)

Poetry: Robyn Sarah, for My Shoes Are Killing Me (Biblioasis).

The Canadian Jewish Literary Awards recognizes the finest books with Jewish themes and subjects by Canadian authors in a variety of genres. It enriches and promotes Canadian Jewish writing and culture, enabling us to better understand our collective past, our shared present, and the world of the future. The Canadian Jewish Literary Awards does more than reward winning authors with a cash prize and a moment in the spotlight. It builds pride, not only in the individuals being honoured, but in the creative achievements that reflect Jewish themes and ideas.

List of benefactors, donors and supporters 2016
How to make a donation

Edward Trapunski: Chair, author of three books and winner of an ACTRA Award as best writer.

Pierre Anctil: Professor of history at the University of Ottawa and the author of numerous scholarly books on Canadian Jewish history. He received the 2018 Canadian Jewish Literary Award in History for Histoire des Juifs du Québec

Miriam Borden: Doctoral student in Yiddish at the University of Toronto, an Oral History Fellow at the Yiddish Book Center, and exhibition curator.

Rita Davies: Chair of the Ontario Arts Council's board of directors since 2015 and has led Toronto’s cultural growth as head of Culture for the City of Toronto and previously at the Toronto Arts Council.

Alain Goldschläger: Director of the Holocaust Literature Research Institute and Professor of French at Western University, and former Chair of The NationaI Task Force for Holocaust Education, Remembrance and Research.

Adam Sol: Author of four books of poetry and one book of essays, How a Poem Moves. He teaches at Victoria College, University of Toronto.

When a Juror has other connections/conflicts with a book being considered for an Award:

When a Juror has a book that is being considered for an Award:

Scholarship: books of original research that contribute to Jewish knowledge.

Biography/Memoir: autobiography, personal memoir or family history The subject must have relevance to the Jewish experience.

Youth Literature: books on a Jewish theme for children or young adults

Yiddish: books in Yiddish or about Yiddish culture; translations from Yiddish (fiction or non-fiction) also considered.

The Jury may choose award categories at its discretion, and may elect to forgo awarding a prize in any category if it determines that there is no prize-worthy publication in that category in a given year.

What is a Jewish Book? 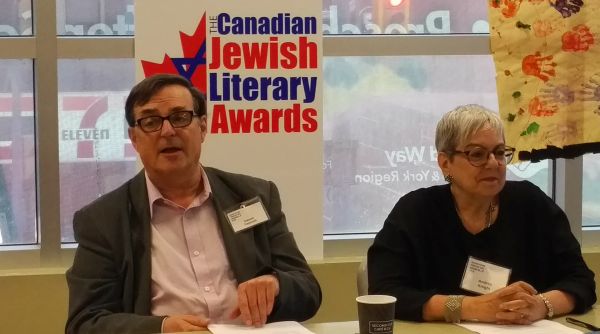 What I’ve learned — and I speak only for myself, not for the whole jury — is that is it possible for a Jewish author to bring a je ne sais quoi, what I would call a Jewish sensibility to her or his writing, regardless of the quantifiable Jewish content. It might be the rhythms of the language, a smattering of Yiddish or Yiddish syntax, a certain sense of humour.

Judith Ghert, in memory of her parents Frances and Samuel Stein